Shannon Kavanaugh | Weddings & Babies and What Would Have Been 10 Years
3753
post-template-default,single,single-post,postid-3753,single-format-standard,qode-quick-links-1.0,et_bloom,ajax_fade,page_not_loaded,,qode-child-theme-ver-1.0.0,qode-theme-ver-11.1,qode-theme-bridge,wpb-js-composer js-comp-ver-5.1.1,vc_responsive

Weddings & Babies and What Would Have Been 10 Years

28 Aug Weddings & Babies and What Would Have Been 10 Years

This was not published elsewhere. It’s just here, for me, and whomever else might find value.

It’s like we’re born with this Big Hope Treasure Chest; our dowry for making it back into the world. And over time, the world takes it back, coin by coin, jewel by jewel, taxation by taxation.

I see the hope alive and well in my young kids. They are just so positive they can do anything. I just upgraded my 4-year-old son’s 12″ bike, to an 16″ bike. He can go much faster now on bigger tires. I heard him tell the babysitter that he was going to ride to downtown Seattle. We live 15 minutes from downtown Seattle by freeway. He would have to cross three bridges and two tunnels to get there. When the babysitter corrected him about the distance and dangers, he wasn’t buying it. He believes with enough effort, he can do anything. Of course, when he gets tired after a half hour with mom, he doesn’t quite understand that it would take a whole lot more effort to ride to Seattle on his 16″ bike. But still, the hope, the belief in himself is there.

Then, the world slowly reveals itself – or we get blinded by it – and little by little, you stop believing you can do anything. You start to understand the true nature of distances and danger and ideas… and one of those things is hope.

Sometimes hope is hard to come by… it can be fleeting, soothing, stolen, make us deliriously happy, move mountains and also be broken. Just a little can save us, too much will hurt us. You shouldn’t let it run out and yet sometimes you have to let it die. It’s as necessary in this life as air. But sometimes, it’s hard to come by. Often, closer to the end and especially, in times of deep sadness.

Today, I woke up feeling horrible for no real reason. I couldn’t get my head on right from the moment I opened my eyes. I was grumpy, edgy, full of sadness. They say the body doesn’t forget. They say our deepest hurts still live on inside us – in our bones, our hearts, our hips, our DNA. They say trauma can actually change our cell structures. It wasn’t until I wrote the date that I realized why I felt so bad.

Today, had I stayed married, we would have made it 10 years. Ten. And if my wedding wasn’t my own precious, crown jewel of hope that this life took – then I’m not sure what is. Some act as though, since I willingly left a deconstructed marriage, that I gave up my right to mourn this day. That I should actually be HAPPY. That because I wanted out of a union which was killing me, that I surrender my right to be sad when an anniversary comes about. They wonder why I miss a man who has caused me so much pain.

The truth is, I don’t. I don’t even mourn my marriage after what it became in the end.

My sadness and anger are for the life that I wanted. The life I planned to live. The life, that when it was good – and there were moments – was the exact life I dreamed of. So forgive me if I’m a little sad and a little edgy. Hope has just been a little hard to come by, today.

But don’t worry, I’m sitting in the front pew with Grandma Louis and Great Aunt Mabel clutching my purse in one arm with my worn and faded, cloth hankerchief in the other, and I’m watching that beautiful bride in white. I can see her bright face. And through the tears welling up in my eyes, I can almost see his proud smile. And in spite of my many years of lost treasures, I can almost remember what that feels like. Weddings and babies, they get me every time.

And whether you can see me or not, I’m here, holding on. And I’m still looking for it everywhere. Because like I tell my babies… the most important thing is trying. 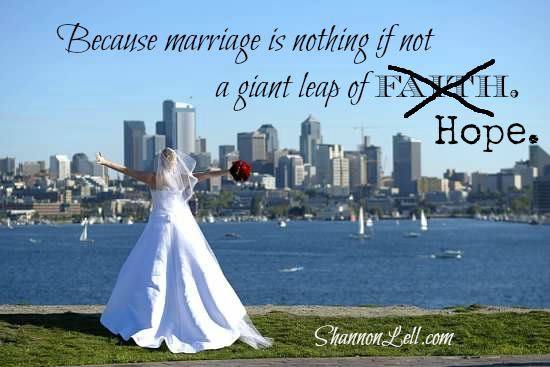