Feminism, Motherhood and a Demanding Career 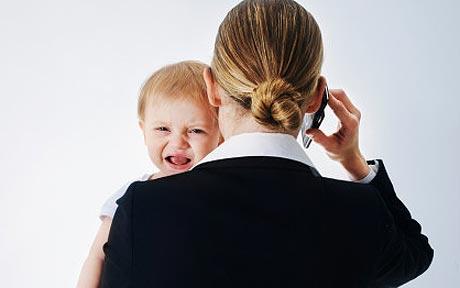 I timed the birth of my first child to coincide with the end of my company’s fiscal quarter. I did this so that I would only lose one quarter’s worth of commissions, instead of two.

I was already using rubber bands to “button” to my work pants when I reluctantly admitted to my boss I was pregnant. It was during a business lunch and the discussion turned toward the upcoming year. He was telling me how well I was doing, and that if I could just work a little harder I was on target to win the coveted award. The look on my face betrayed me because when I said nothing, he said, “What’s wrong? Wait! Let me guess, you’re pregnant.” Then the look on his face betrayed him because I clearly detected disappointment.

While pregnant I suffered from such severe edema due to extensive air travel, I developed carpel tunnel in both wrists and had to wear compression socks every time I flew to minimize the swelling in my legs. When I was 36 weeks pregnant I attended a five-day meeting across the country without my OB/Gyn’s full consent. At that stage in my pregnancy my blood pressure was spiking so I snuck out of meetings to borrow the hotel’s blood pressure cuff to monitor myself.

My daughter ended up coming two weeks shy of quarter’s end and while holding my hours-old newborn in one arm, I used the other to close deals from my Blackberry.

On my twelve week maternity leave, that paid me a fraction of my working wage, I sent and received emails. My boss sent me one obscure message, the text was simply the dollar amount of my current quota deficit. The message was obscure, but the subtext was clear–he wanted me to make my quota. This was a week after I gave birth. In those twelve weeks of leave I attended a surgical case I couldn’t get covered and a lunch meeting that had been scheduled for months.

On my first business trip post baby, when my daughter was 4 months old, I paid to have my mother-in-law go with me. I was breastfeeding and didn’t want to leave her for that long. When my daughter was five months, I had no choice but to leave her for over a week. I pumped on the airplane–I excused myself during meetings and dinners and had the hotel’s kitchen store my milk in their freezer for the trip home. Soon after I got home I stopped breastfeeding all together because it was just too hard.

Pre-kid I ran in several social, work circles. I stayed up late telling jokes with the men. I commiserated with the ladies. But when I became a mom, there was a whole other crowd I didn’t know existed because they talked in hushed tones and you had to also be a mom to be included. All we talked about was how to manage a work-life balance in this competitive career. Sadly, no one was truly honest, including me. Everyone was too afraid to admit that they weren’t doing it very well, or at all.

One of the only woman managers in my division was pregnant with her third child at the exact same time as me. She gave birth days after I did. When I saw her at the week-long meeting when we were both five months postpartum I asked her how she was doing because her job was nearly 100% travel. She was Fed Ex-ing her breast milk home to her nanny and unemployed husband. She was also wound tighter than an eight day clock.

I need not tell you that a high-end sales job is competitive. No matter what management says to placate you, the reality is you are as valuable as your last quarter’s percent to quota and if you are only 99% committed to your job, there’s a never-ending stack of resumes beckoning to make up that extra 1%.

“You can do anything you put your mind to.” They all told me while I was growing up. The message was: You can have a career and a family and you can be happy because countless women before you sacrificed so you don’t have to. Pre-children, when my life was myopic and focused primarily on my own needs, I believed them. Then colic and ear infections and late-night ER visits blew my monocular lens to shit in less than a year and my world became a prism of shaky, fractured focus.

I do not mean that I couldn’t work and also be a mother. That is do-able and is being done quite well all over the country. What I mean is, I couldn’t have a demanding, high-minded career and move up the ladder into a leadership position and be a mother. The sacrifices to my family life were too great and were never ones I was willing to make. Ever.

I enjoyed working for the stimulation, accomplishment and rewards it afforded me. I was quite good at my job, too. But like every new mother my priorities and focus shifted. Before I filed a lawsuit for discrimination I was willing to take a step down and back to spend more time with my family, but economics and a crappy real estate market momentarily forbade it. But we already know how that story ended when the decision was made for me by a methodical and deliberate derailment of my career.

That derailment began when I recommended a colleague to a sales position in an adjacent territory to mine. I recommended her because she had an excellent reputation, intimate knowledge of the competition, and came with impeccable references from our clients. She happened to live in the territory she would cover and was wanting to transition. She was 37, had 10 years of medical sales experience and two children. Instead, my boss hired a 27-year-old man, from another state, with zero sales experience, (but hey, he played football for my boss’ favorite college!).

I obscurely questioned his motives, but my subtext was clear, and that turned out to be the first “mistake” in a long line of “mis-steps” in standing up for myself.

Despite all the ground-breaking work of Gloria Steinem et al, the choice between professional goals and family life are choices that are still required mostly of women. Largely because of these choices and requirements, women in leadership positions are dismal by comparison.

“Women are not making it to the top. A hundred and ninety heads of state; nine are women. Of all the people in parliament in the world, 13 percent are women. In the corporate sector, [the share of] women at the top—C-level jobs, board seats—tops out at 15, 16 percent.”  ~Sheryl Sandberg, CEO of Facebook

I did make the ultimate choice to have children. This is true. And for that, I apparently, (unknowingly) sacrifice any high-end career goals I might have had in my chosen profession because the competitive environment is not conducive to taking a step back to raise a family.

Although the latest generation of fathers (my husband included) are much more involved in the raising of children, you still don’t see many men foregoing a family to focus on their career or vice versa. In fact, as I write this, every male supreme court justice has a family while two out of the three women on the bench, do not. The third, Ruth Bader Ginsberg, began her judicial career after her son was grown. Condoleezza Rice is the only woman to hold the position of national security advisor and is the only national security advisor not to have a family since the 1950’s.

And must I mention Oprah… again?

These things are just not acceptable to our society anymore.  Female representation among the highest ranking careers in the country, in particular, our government, is imperative. How else will our voices be heard? How else will these impossible choices stop being primarily a woman’s choice to make?

I’m not implying that having a child should involve zero sacrifices to a woman’s career. I was willing to sacrifice breastfeeding, extra assignments, vacation time, money and whole host of things for the sake of my family. I’m saying that the sacrifice of having a family should not be placed so squarely on the woman’s shoulders alone. There are burdens that companies can take on too that will alleviate the need for impossible choices like, not having children, waiting to have children, or the deliberate and painful derailment of a career in a competitive industry.

As I see it, this is mostly a systemic and societal issue–one that needs to be addressed by changing mindsets and attitudes toward the value of family versus the value of money, or achievement or getting one step ahead, faster.

I know that I am privileged. I know that I have choices many women reading this may not have. I get that. But if very few women are capable of reaching and sustaining a career at the highest levels of leadership, then how can that be good for all women?

It’s not a trick question–it can’t.

I have never considered myself a “feminist.” I have been contented to keep my head down, keep working, and roll with the punches that life hands me while not being a victim of my circumstances, including my gender. But I can’t anymore. Not after this non-feminist found herself in the middle of a sexual discrimination lawsuit against a company that specializes in women’s health. How’s that for irony?

As I write this my former company’s executive management list consists of eight men and zero women–and this is a company that manufactures and sells medical products EXCLUSIVELY for women. There is something inherently wrong with that equation.

Now, I believe it’s my obligation to use my voice to stand up for all women who face impossible choices, no matter which economic or educational stratosphere they inhabit or how many kids they choose to have. Because feminism isn’t anti-men, it isn’t even about women’s liberation and rights anymore. It’s about having choices and making sure society supports those choices. By doing that, society recognizes the invaluable, irreplaceable contribution women make to our families, the board room, and our world as a whole, and that is something I can get behind.

*The statistics recited in this article, and the inspiration to write it, are from the recent, thought-provoking op-ed, “Why Women Still Can’t Have It All” by Anne-Marie Slaughter published in The Atlantic.