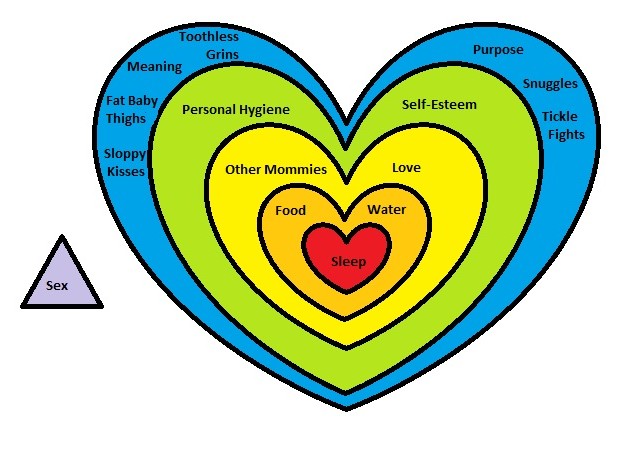 This post has been sitting my draft folder since November. I started it back when I was in the throes of debilitating sleep deprivation. I never finished it because I couldn’t seem to come to a coherent point which I’m sure had a lot to do with the debilitating sleep deprivation. Now, with considerably more sleep and four months of hindsight, I think I can finish it.

Back when I started the original version, my son was three months old. He was waking up every night around midnight and crying for a minimum of two hours. My husband was sleeping in the guest bedroom and I was waking up at 7am every morning to take care of our two children. At 2am the next morning, I would finally get to put my head on a pillow again until someone started crying. I was out-of-my-mind tired every. single. day. I started writing this post in an attempt to understand why I felt so crazy all the time. The name Maslow kept creeping into my consciousness.

I first heard of Maslow’s Hierarchy of Needs Theory in health class my sophomore year of high school. My teacher was a stout, burly man with one of those hard stomach’s like the base of a kettle drum. He was also the wrestling coach and walked with a crooked, bow-legged, wrestler’s limps up and down the aisles peering over your shoulder during tests.  His style of instruction was intimidating and declarative as in, “You can still get pregnant even if the girl is currently menstruating don’t you know, kids?!” Then he sneered at you with a knowing look while you fidgeted in your plastic chair. Informative, but also slightly traumatizing. The next time I would come across Maslow’s Hierarchy of Needs Theory would be in one of my psychology courses in college. It has always stuck with me, but since those years I haven’t had a need for it… that is, until now.

Right now in my life it seems everyone needs something from me every second of my day. I find myself constantly evaluating which needs are priorities and which can wait. For example, at this very moment it is 12:17am. I am sitting on my bed in the dark listening to my three-month-old son make those grunting, infant sounds in his half-sleep state. I’m debating. Should I go in there and rock his crib in futility? (Because it never gets him back to sleep, it just speeds up the waking process.) Or should I continue to write this post? Should I attempt (again in futility) to get some sleep myself? Or is my need to write more important than his (or mine for that matter) need to sleep? Sometimes it feels like it is, but Maslow would disagree.

Maslow’s Hierarchy of Needs is a theory in psychology pertaining to Human Growth and Development. Maslow came up with this theory by studying what he called, “exemplary people” like Albert Einstein and Eleanore Roosevelt. His goal was to uncover the principles behind basic human motivations and to better understand why people will seek out certain experiences in their respective environments.

The bottom of the pyramid represents our everyday basic needs; air, food, water, sleep, pooping… you know, the necessities. You will notice that it also lists “sex” in that category. At this point there is no need to remind you that Maslow was a man.

Our first and foremost motivations have to do with survival and security; when those needs are sufficiently met, we are then motivated to seek out different needs like love and self-esteem. When all of those needs are met, we get to the top of the pyramid, the pinnacle of human development and what we’re all ultimately seeking which is self-actualization. Self-actualization is defined as having as sense of right and wrong, acceptance of facts, lack of judgement and expressing creativity. I would extrapolate on that definition and suggest that it also means finding a sense of purpose and meaning in one’s life.

I have to admit, it isn’t the prioritizing of other people’s needs that inspired me to contemplate Maslow’s theory. Believe me, the little people in this house are doing just fiiiiine. It is ME who is lacking many of my basic needs right now and this has me asking what is really important and what can wait.

Having a baby strips your life down to its most basic elements in an instant. All those layers of hard-won self-esteem, accomplishments and the loving relationship you built with your spouse; they all exit the building along with your placenta. Days after birthing that precious baby you are literally and figuratively back to the lowest rungs of the human growth ladder. You are a shadow of your former self, begging and pleading for basic necessities like sleep, food, water and elimination. (Because pooping after a vaginal birth is something no one ever tells you about, but should NOT go without its fair share of warnings! Why didn’t you teach us that Mr. Health Teacher?)

It’s also an extreme rollercoaster ride. In the seconds it takes that doctor to place that baby on your chest, like a lightening bolt you understand with a fierce profundity the meaning of your life. If there was ever a moment at the pinnacle of human growth, it is the moment you look into your child’s eyes for the very first time. In the days (sometimes hours) that follow that moment, you begin to free fall like rain through a gutter back down the ladder of human growth until you are a milky puddle on the floor begging for someone to bring you a sandwich and give you five minutes of sleep. (And I can say for certain Mr. Maslow, that sex is NOT a basic need. For goodness sakes man what were you thinking? Really?! Sex = to breathing?!)

That steep slide down the slope of human motivations will make you nauseous at the very least, and crazy for SURE.

In those long early days (and nights) you spend most of your time on that lowest rung, usually literally lying on the floor in need of everything while simultaneously giving everything. Weeks go by like that. Then, there might be a few days when you are fed, watered and yet still exhausted, but all you want to do is cry on the phone to one of my friends because you desperately need someone to love you and it sure ain’t coming from this baby.  At some point, maybe months down the road, you look in the mirror again. It’s the first time you’ve seen the natural shape of your eyebrows since college not to mention the natural color of your hair. You think maybe you should do something about those things because your self-esteem took a serious punch around the third trimester.

Somewhere around six months postpartum you start to recognize yourself again, not just physically, but mentally. You start to see signs of the woman who thought about more than the color and consistency of her baby’s poop. You start to want to be that woman again; to use your brain for more than just calculating the time it will take you to make a grocery run as opposed to the next scheduled nap. Maslow says it’s the highest rung of the human needs and motivational pyramid, the self-actualizing part that yearns to be creative, to think and give meaning to your life.

And this is why I couldn’t finish this post. As I was sitting in bed after midnight, clearly lacking one of my most basic needs for sleep, I was still writing–still attempting to be creative–still creating meaning in my life in the face of pure exhaustion. Now, months and many more hours of consolidated sleep later, I can write the conclusion to this post because I can see the flaw in Maslow’s Theory (and not just the sex part).

Maslow might have studied Einstein, but he didn’t studied Mommies, and we all know that mommies are capable of building pyramids in the time it takes to nurse a newborn. Don’t get me wrong, we’re not nonhuman, but in the face of our children, we are capable of superhuman things.

One of life’s greatest privileges and pleasures is having a child and there needn’t be a better reason to do so than to give meaning to your life. There is a reason that after WWII there was a boom in child births; people wanted to bring meaning back to a world that had suffered so much loss. Children, and all the unfettered hope they represent, do that best. The irony of this situation is that in the midst of all the physical and emotional energy required to have babies and raise them, meaning is sometimes hardest thing to hold on to. Meaning lives up on the top of that pyramid while you’re stuck down on the floor eating your toddler’s left over mac-n-cheese because it’s in arm’s reach and it doesn’t require you to get up. Crazy, indeed.

As I sit here now, 7 months postpartum, I realize that the reason I felt crazy all that time was because meaning is what I was looking for in the first place and yet was the one thing I couldn’t find due to my lack of significant shut-eye.

So I propose a new Hierarchy of Needs Theory. One just for us Mommies. I think it would look something like this…

I included sex because, well, maybe someday. Until then, “You can still get pregnant even if a girl is  breastfeeding don’t you know kids!?” See, informative and traumatizing.